The River Pang and Conservation

Stanford Dingley is situated in the eastern end of the North Wessex Downs Area of Outstanding Natural Beauty (AONB). This is a significant conservation area that is roughly bounded by Wantage in the north, Devizes in the west and Andover in the south. Stanford Dingley is surrounded by a number of Sites of Special Scientific Interest (SSSIs). Most local to the village is King’s Copse to the south through which there is a public footpath accessible from the Roman Way footpath off Bucklebury Lane.

The Pang itself is a small chalk stream river and a tributary of the River Thames. It runs for approximately 23 kilometres (14 mi) from its source in the village of East Ilsley to its confluence with the Thames in the village of Pangbourne.

The river, and its water voles, is thought to have inspired author Kenneth Grahame’s character Ratty and his book The Wind in the Willows.

The river’s Perennial Head – below which it always flows, is at the Blue Pools just below Stanford Dingley, although the exact location varies depending on rainfall levels.

In times of high rainfall it can be traced back to above East Ilsley on the A34, whilst at other times it may be as far downstream as Hampstead Norreys.

In the village of Compton the Pang is joined by the River Roden, a similar but smaller chalk stream with its source on Churn Down to the north east of the village. 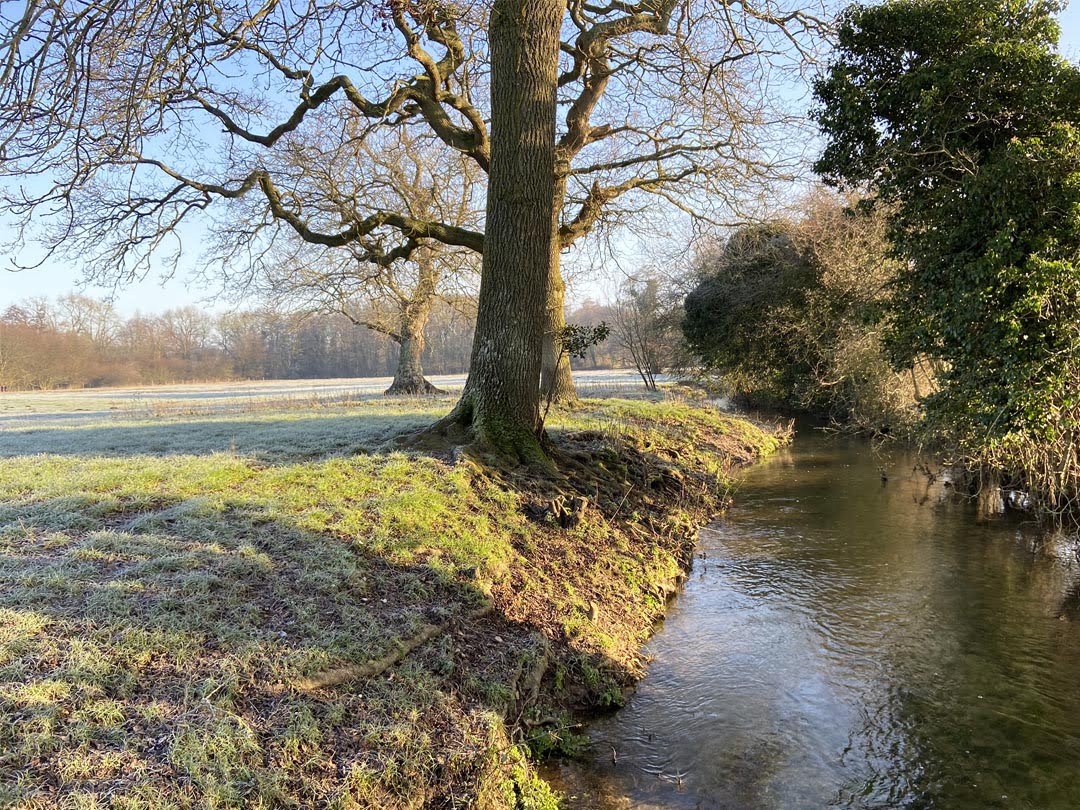 To the east of Bradfield the Pang is joined by the River Bourne and turns north to flow through the villages of Tidmarsh and Pangbourne, eventually entering the Thames between Whitchurch Lock and Whitchurch Bridge.

The valley of the River Pang between Compton and Bradfield is rather isolated, penetrated only by narrow country lanes. Because of this isolation, the valley has not become the residential commuter area that is much of Berkshire, and is still largely agricultural.

As a habitat, the River Pang sits alongside the Test, Itchen, upper Kennett, and Lambourn rivers as classic and very unique southern chalk streams. Globally there are only about 200 chalk streams of which about 160 are in England.

These clear water habitats are rich in nutrients and support river plants such as the beautiful white water crow (ranunculus), many species of invertebrates, and with the brown trout at the top of the hierarchy in a healthy stretch of river.

The countryside surrounding the village is made up of a very diverse range of habitats. There is the River Pang itself, the alluvial water meadows beside it, the livestock and arable farming habitats higher up the slope and the historic deciduous woodland and more recent evergreen plantations on the valley sides. In addition the ancient Bucklebury Common heathland south of the Pang Valley provides further diversity.

The Common, as the largest stretch of lowland heath habitat in Berkshire, is extremely important; for example it is one of the few places one can visit to hear the call of the very secretive nightjar. 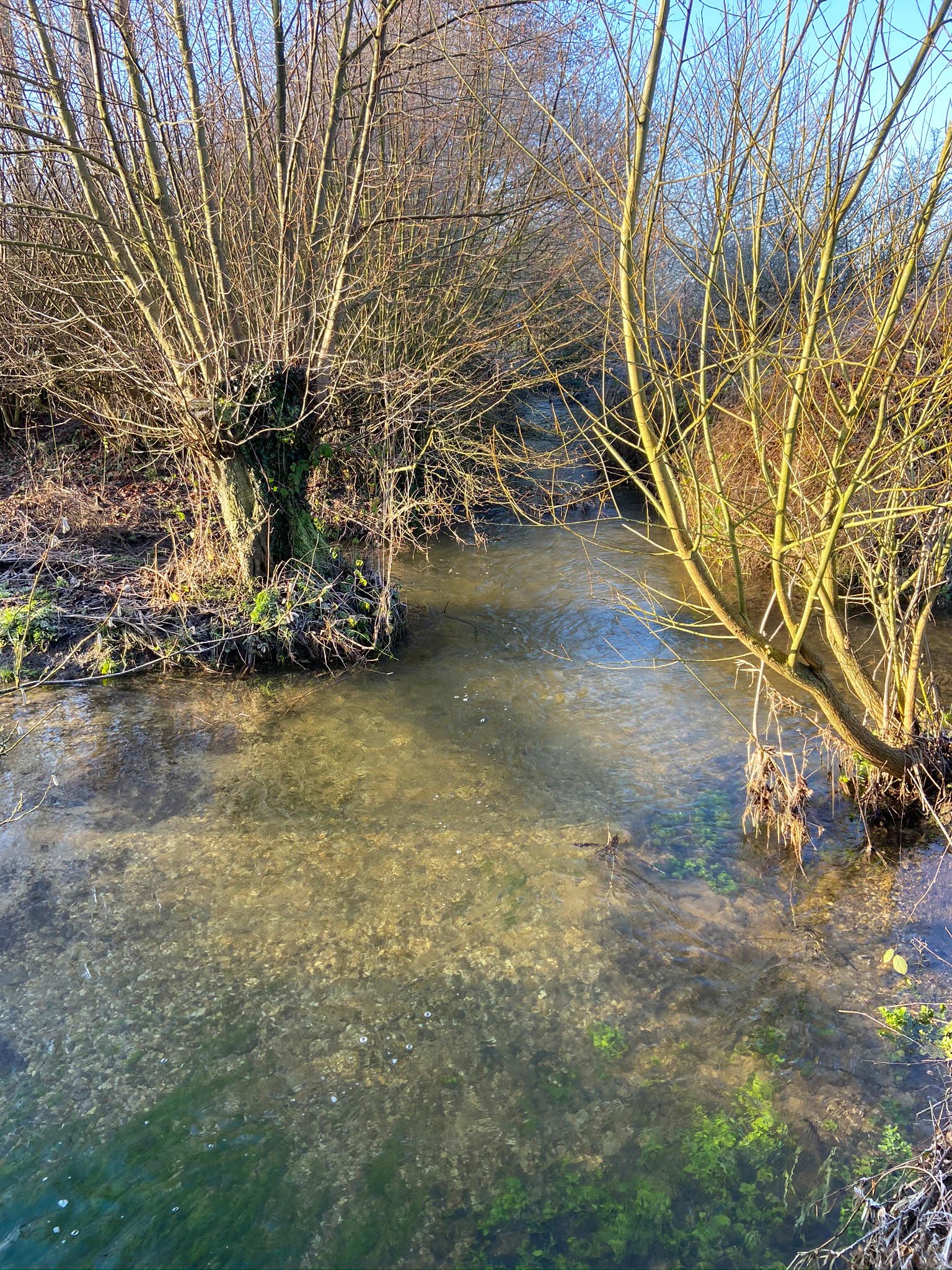 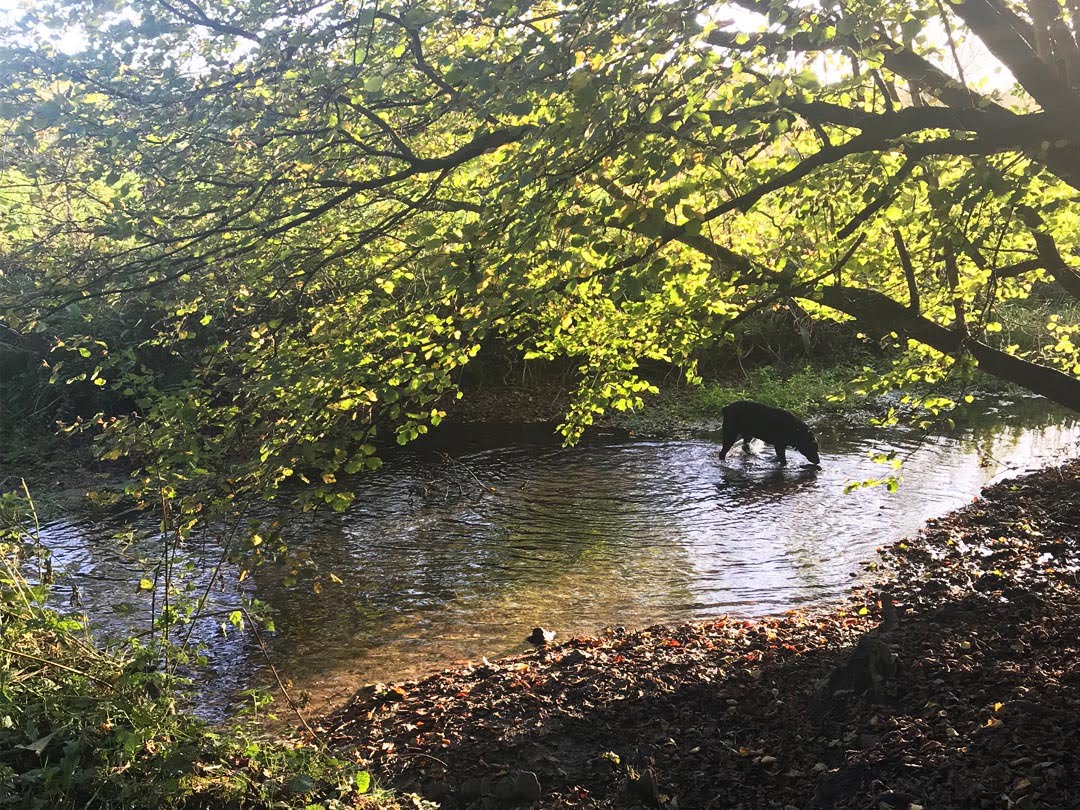 Today the River Pang for most of its length is in relatively sound condition. This was not always the case in the past and cannot be taken for granted in the future.

In the late 1980s it became apparent that the Pang’s very existence was critically endangered. Since the mid-1960s the pumping station at Compton had been abstracting 14 million litres per day for domestic consumption.

Around 1989 the river completely dried up as the water table was depressed by the abstraction. This, coupled with a number of pollution incidents threatened the sustainability of the river and a small group of parish councils and local individuals got together to campaign for a significant reduction in abstraction.

In 1991 the local water company agreed to reduce abstraction to 5 million litres per day. Later a new bore hole was drilled near the Thames and abstraction at Compton stopped altogether.

This success, together with the support of the Council for the Protection of Rural England and West Berkshire Council, led to the formation of the Pang Valley Conservation Project which at its height employed 6-7 people based at the Englefield Estate offices working on conservation activities and rural business enterprises. All of the local farmers came on board and, together with volunteers, great work was done planting trees, laying hedges, installing Barn Owl boxes and a whole host of other activities .

Alas, over a period of time the various funding streams dried up but at least the Pang didn’t. We now move into a period of uncertainty. Aside from a rather lifeless stretch between Bucklebury village and Stanford Dingley, the River Pang is in relatively sound condition but there is definitely room for improvement. Without protection and the interest and efforts of its friends the river as a habitat will deteriorate. It is important to appreciate the achievements of a few individuals who sustained and improved the river over the past 20-30 years and for the need of a new generation of volunteers to come forward to take this unique natural asset into a safe future.

Today the pre-eminent local conservation organisation is West Berkshire Countryside Society. Alongside fund-raising and social events, the Society runs two volunteer groups. The Pang Valley Conservation Volunteers undertake practical tasks such as hedge-laying, footpath clearing, planting hedges and wildflowers, creating glades and other habitats in historic woods and removing undesirable plants such as Himalayan Balsam, Japanese Knotweed and Ragwort. Bucklebury Heathlands Conservation Group have steadily been removing the silver birch, Scots pine and other trees from Bucklebury Common to enable the re-establishment of heather, bringing with it species such as woodlarks, nightjars, glow-worms and lizards.

Whilst we can and should celebrate such success, we must also remember there are aspects that are going less well. In line with many parts of England and despite the provision of 119 nest boxes throughout the Pang Valley, Barn Owls have suffered after the cold wet spring of 2013 as prey species failed to breed in sufficient numbers. There were no Barn Owl chicks raised in 2013 and the number of adult birds is very fragile.

It becomes clear then that much remains to be done to protect and improve our local environment. This does not happen on its own and in the new economic reality no government agency or local council will come and do this for us. Localism and self-help will determine whether we can hand it on in a better or worse condition from when it was handed to us. Please Do get involved to support local conservation!

There is a group of villagers (aka “The Dredge Gang”) who undertake vital maintenance work on the River Pang around Stanford Dingley and St Denys’ churchyard. Longer term there is an ambition to improve the hydromorphology and habitat upstream of the village to the point of establishing a substantial and sustainable brown trout population which has suffered through recent weather events.  If you are interested in joining the Dredge Gang contact Oliver Brook. 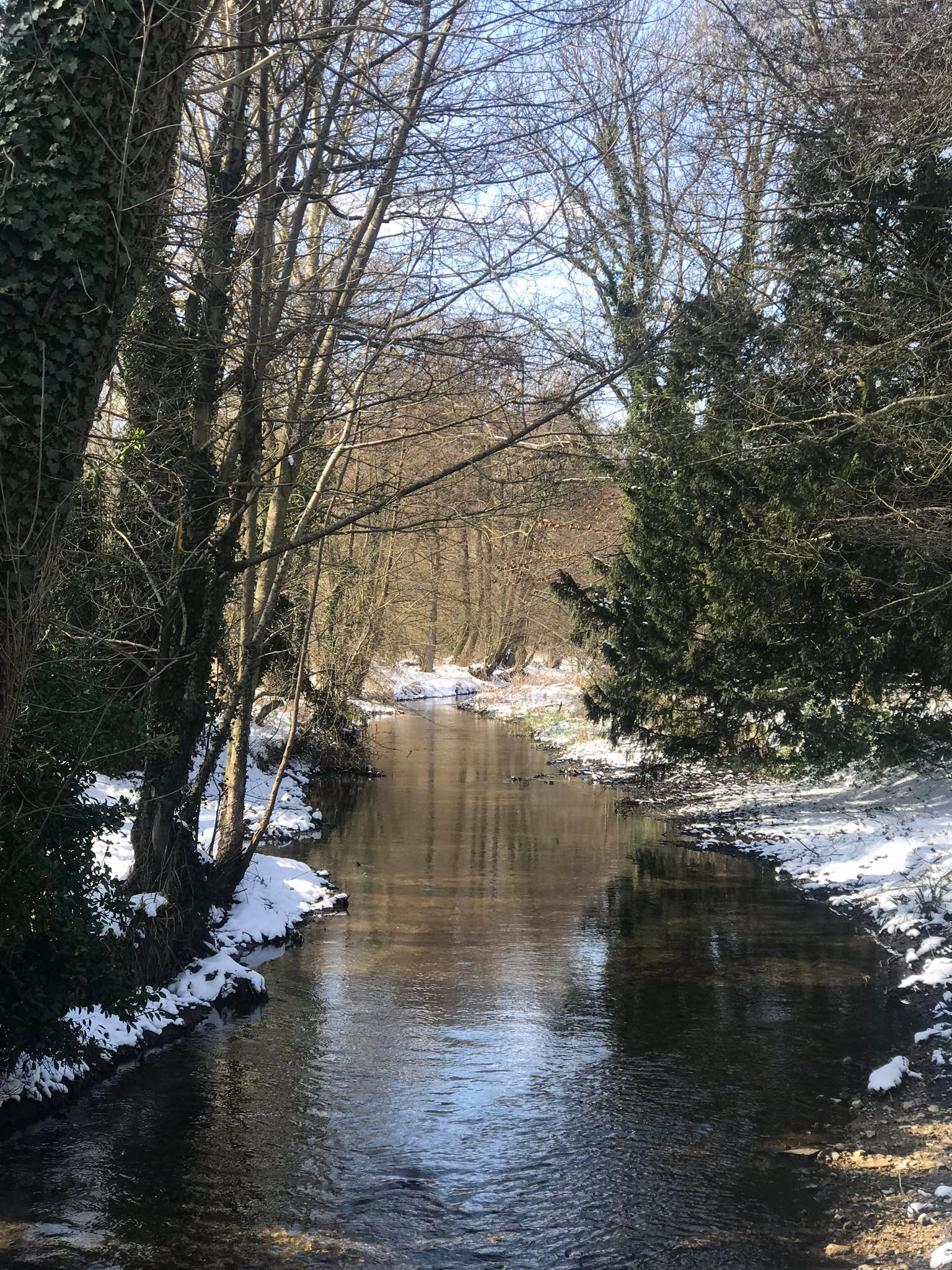 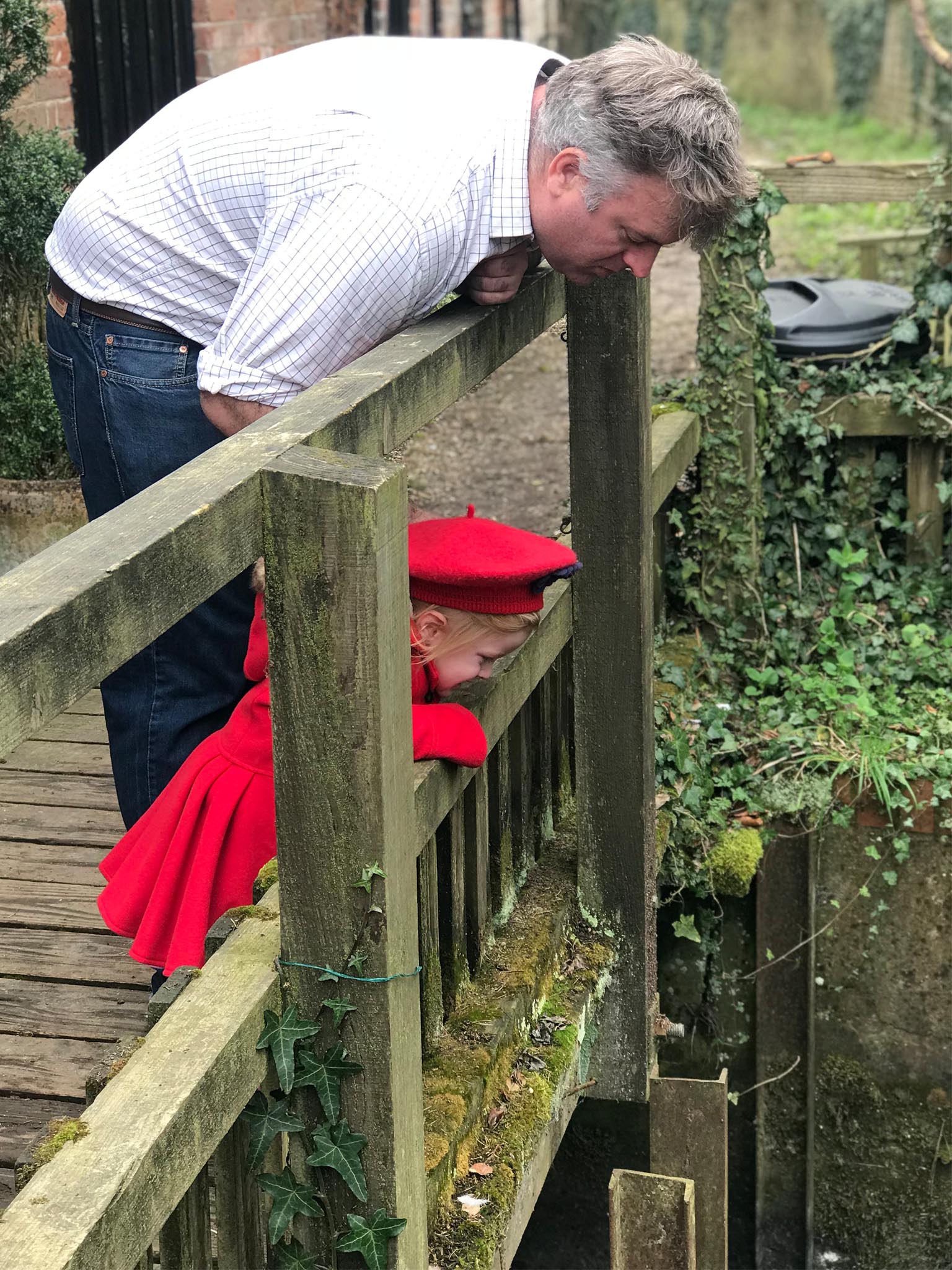